TransAIR aims to extend collaboration between the regional network of researchers from Bremen with scientists from the U.S. The project develops a transatlantic dialogue about artificial intelligence and robotics to facilitate the exchange of ideas about AI research, commercialization and public debate in Germany and the U.S. To support collaboration between the two countries, TransAIR plans to hold two conferences that bring together American and German scientists in this field. These events will help identify promising areas of potential cooperation within open research projects.


Bremen is a leading location for AI-based robotics. By combining AI with cognitive sciences and robotics, local institutions have become a core part of Germany’s scientific community, which covers the entire spectrum of AI research. Several hundred specialists from Bremen contribute to AI research and development at a globally competitive level. The most AI-focused institutions are the Robotics Group at the Institute of Artificial Intelligence (IAI) and the Collaborative Research Center EASE (CRC EASE), both at the University of Bremen, as well as the German Research Center for Artificial Intelligence (DFKI). In addition, a network of transfer-focused institutions, AI-based start-ups and well-established businesses is creating many innovative AI products and services.

The vision at TransAIR is to ‘put Bremen on the map’ as one of the prime locations for top research in the field of AI-based robotics and robust AI, and to initiate collaborative work between Germany and the U.S.

Message from the Initiator

Dear members of the AI and robotics communities,

It is my pleasure to announce that our effort to build stronger bridges between the United States and Germany can now be advanced with increased intensity. Thanks to funding from two major government initiatives, the blossoming AI and robotics cluster in the Hanseatic City of Bremen and its surrounding areas has been starting a dialog with researchers and industry in the United States to identify common ground, differences, and collaboration opportunities. We’d be happy to have you onboard, too!

We think that the communities in the U.S. and Germany complement each other very well. In Bremen, for example, we take a highly integrated approach to AI and robotics. We combine conventional AI methods with powerful modern methods such as machine learning in order to make systems more robust and transparent. This approach lies at the heart of major research initiatives such as EASE and Knowledge4Retail. The city-state of Bremen is also the home of some of the world’s leading industry-focused research in the fields of space and underwater robotics.

Despite a large number of brilliant research projects worldwide, we are convinced that there are still so many important questions to be investigated that it is necessary to collaborate rather than compete against one another. This is also the only way to keep state-of-the-art AI and robotics technology in the hands of the public, because individual research institutions cannot match the budgets of large corporations. We therefore strongly support the concept of Open Research and would be happy to see you build on anything we have developed!

In this spirit, please get in touch if you would like to exchange ideas or work with us. We look forward to meeting as many of you as possible in person, especially at our upcoming events in the U.S.

Initiator and project director TransAIR, a computer science professor at Universität Bremen and head of the Institute for Artificial Intelligence (IAI). 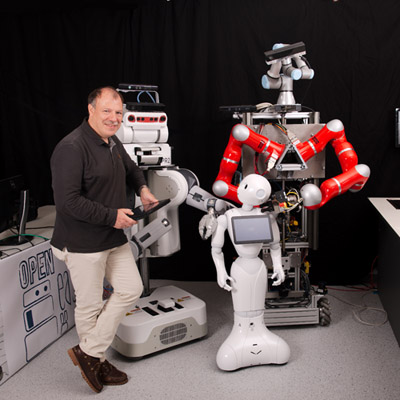